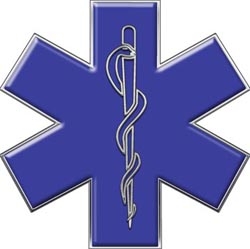 The Star of Life is a blue, six-pointed star, outlined with a white border which features the Rod of Asclepius in the center, originally designed and governed by the U.S. National Highway Traffic Safety Administration (NHTSA) (under the United States Department of Transportation, DOT). Traditionally in the United States the logo was used as a stamp of authentication or certification for ambulances, paramedics or other EMS personnel. Internationally, it represents emergency medical services (EMS) units and personnel. A similar orange star is used for search and rescue personnel and yet another version is used for Wilderness emergency medical technician.

The snake emblem is the Rod of Asclepius, widely used as the symbol of medical care. There are several theories as to it's development, and it is named for one of them. Asclepius was a figure in Greek mythology who possessed healing powers. 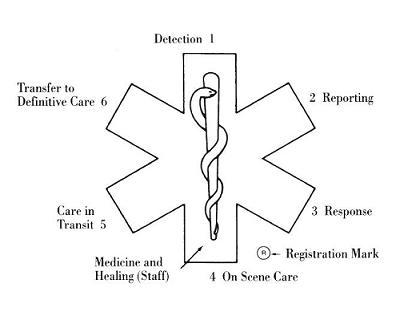 The six branches of the star are symbols of the six main tasks executed by rescuers all through the emergency chain: